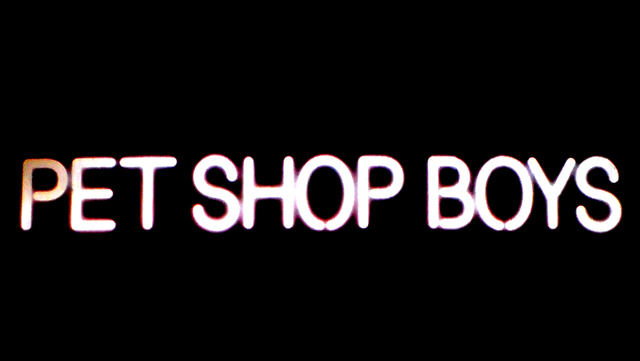 Planted in the centre row of a sell-out Cardiff International Arena, I surveyed the room expecting the stands to be awash with mardi gras rainbow colours, and jubilant screaming queens with pointed hats. Instead, I found myself amid a diverse collective ranging from 80’s Hawaiian shirted throwbacks -- recapturing their novateur vogue days – to fashionable indie-intellectuals – here to appreciate the tongue-in-cheek passé chic.

The show opened with the giddy 80’s hit ‘Heart’. Tennant and Lowe emerged from between two walls wearing head-cubes that looked ridiculous enough to be cool. Two backing singers, also with cubes for heads, played on a fake keyboard -- an affirmation of the duo’s reluctance to feature ‘real’ musicians on stage. ‘Heart’ playfully bridged into another frothy love affair ‘Did You See Me Coming?’ after which, Neil addressed the Cardiff crowd, introducing a mish-mash of ‘Can You Forgive Her?’ and ‘Pandemonium’.

As one would expect from Tennant and Lowe, there is always room for a political reference. ‘Building A Wall’ sees a toing and froing between Chris and Neil, ‘Protection! Prevention! Detection! Detention! There’s nowhere to defect to anymore!’ The songs climax harked back to Pink Floyd’s ‘Wall’ concert with the demolition of a wall. Rather fittingly, ‘Go West’ maintained the politische fragen -- this time with a Soviet twist. Video projections featured iconography relating to the fall of Communism. The whimsical arrangement of ‘Go West’ was a noticeable highlight -- consisting of a new ‘Paninaro/Opportunities’ arrangement with Chris on electric drums.

The upbeat momentum continued with an obliging fan-boy jolt: a previously unperformed coupling of ‘Two Divided By Zero’ and ‘Why Don’t We Live Together?’ complete with dancing New York skyscrapers and a snappy Disco tease of ‘Opportunities/In the Night’ -- allowing Chris to take centre stage for a jig that received the most rapturous applause of the night. ‘I was faced with a choice at a difficult age…‘ was the tie-in to ‘New York City Boy’, conjoined with a pleasing rendition of ‘Always On My mind’.

A verse of ‘Closer To Heaven’ juxtaposed into a revised version of ‘Left To My Own Devices’. It lacked the orchestral flourish of the Introspective original but was busy enough not to need it. A laconic piano solo by Chris – and a rare smile – signalled a change in mood. Trademark Pet Shop Boys melancholy ensued with a rare treat called ‘Do I Have To?’, a bitter-sweet ballad about being involved in a love triangle.  Neil, now in a tuxedo, is accompanied by two ladies in red ball gowns dancing the Tango – head-cubes still in place.

‘King’s Cross’ reflected the feelings of despair in a world where no one listens, or cares; the end of the line where hopes and dreams are crushed – pertaining as much to today’s Con-Dem Nation as we as the icy thumb of Thatcherism. ‘The Way It Used To Be’ aroused the mournful despair felt when enduring adulterated love; a male dancer’s stirring routine effortlessly foretold the emotional turmoil. Brooding reflections continued with ‘Jealousy’, featuring a passionate pas de deux of a disintegrating relationship that climaxes into a violent dissolve. Tennant’s asexual twain resounded the worldliness of someone who understands what it feels like to languish in reflective solitude.

The tempo shifted up a gear as the dramatic drumbeats of ‘Suburbia’ lifted the crowd. ‘Suburbia’ was the song that hooked me to the Pet Shop Boys’. It tells of the rotting and decaying suburban world hidden behind plush picket fences and its chorus remains as infectious and timeless as ever. For ‘What Have I Done To Deserve This?’ Neil performed a duet with a posthumous Dusty Springfield; appearing as a backdrop on the great wall, “Tonight we remember Dusty Springfield,” he exclaims. ‘All Over The World’ is turning out to be a crowd anthem, but why the boys felt the need to squeeze in a cover of Coldplay’s ‘Viva La Vida’ among a gay disco-come-euro-pop mélange featuring ‘Sea Vida E’, ‘Discoteca’, and ‘Domino Dancing’ I’ll never know. Regardless, they stamped it as their own.

Neil Tennant’s mournful reflections layered over Chris Lowe’s power-pop beats don’t come any better than ‘It’s A Sin’. Its double meaning addresses inner conflict and guilt; be it religion, sexuality, or a troubled past. It would have been an unforgivable sin to not have performed ‘Being Boring’ during the encore. They didn’t disappoint. As the swirling chords ascended I was taken back to teenage parties, ‘in rented rooms and foreign places’ with dreams of leaving loved ones behind to go in search of fame and fortune.

The last song was the Disco version of ‘West End Girls’ remembering London amid the neon colours of Leicester Square, Soho, and the West End -- voyeuristic worlds where, ‘No one knows your name’. It was a fitting end to a celebration of the duos lasting legacy. Neil Tennant’s voice – as good as ever -- contained no notions of masculinity or femininity, but somehow managed to express euphoria and wry nihilist romanticism that was more impassioned than the most powerful of vocalists.  To me, the Pet Shop Boys are the forefathers of simplicity, elation, and melancholic despair; tackling personal issues such as alienation and escapist fantasy, self-acceptance and broken relationships, unrequited love and secret affairs. Matters of the heart  are intertwined with affairs of the mind; employing art, culture, history, literature and politics to a disco beat.

There was a youthful exuberance that came across in Tennant and Lowe tonight; these cool uncles certainly haven’t chosen to slow down or to rest on their laurels -- nor have they resorted to churning out lazy renditions of tired classics in order to please the unappeasable pop culture. The emphasis of this tour is geared more towards euphoria than cultural avant-garde. Having exhausted them on the last set of tours, the boys have omitted all songs from their previous two albums – Release and Fundamental – along with expected chart hits which cleared room for some older novelties.

For all their theatrical indulgences there is never a trace of ego, pomp, or pretence to be found in Tennant & Lowe -- in the music industry, that is an irony in its self. The Pet Shop Boys are a band with nothing left to prove. Tonight, if front of an appeased Cardiff crowd, these torch-bearers of sophisticated pop-art made a point of proving why they’ve both made such a little go a very long way.

‘Pandemonium (Live at the O2 Arena)‘ is available on Spotify