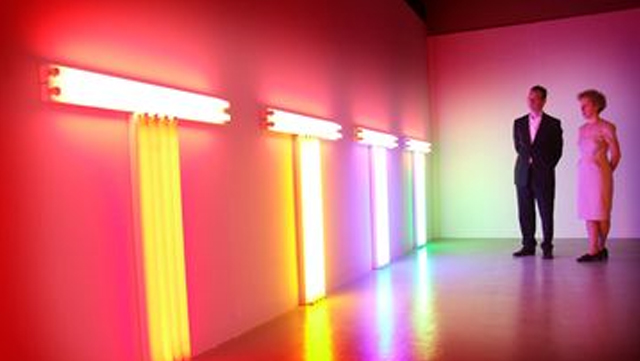 I went to the Tate Modern Gallery today to see just how bad things can get. So, what do you get when you mix the words ‘modern’ and ‘art’ together? I’ll tell you what: Tripe. Modern art is the process where, through the dark art of physics, matter is manipulated into assuming the many shapes that induce the human gagging reflex –much like Vogon Poetry.

The gallery consisted of some of the most inane ‘pieces’ that I have ever had the urge to dial my insulin pen all the way to 11, and directly inject into my eye balls until they explode over. One frivolous piece was a plain, simple mirror! Ah, but by glancing into the mirror you are viewing the most exquisite work of art: the human face, you might say. Have you seen me naked? I stare at the reflection of one of the universes most well-crafted goatees every day. Why would I want to travel hundreds of miles to London to see it?

Either the janitor had nowhere to park his Volkswagen camper van, or someone needs to be destroyed until they are broken. Somebody also needs to stop hanging their best silver out to dry as well because that room could be used for something far more pretentious. Projected on the wall of one room was the worse porn film to ever come out of Chiswick – or the glove box of the janitor’s camper van: a naked couple passing around a large, white, inflatable ball. Later that evening I bought copies of FHM, Loaded, and Woman’s Weekly, rolled them up, and beat myself in the testacies with them.

No wonder the Russians don’t have a sense of humor. As a sick joke, someone decided to put on a display of Russian propaganda posters. Russian art, next to the rest of the modern tripe here, is striking, bold, and belongs in a building of its own. It’s not even modern any more; and it’s actually quite good. Next door to the propaganda art was a room with coloured canvases that had words painted on them. Why ‘O why? Also on display was a sick looking palm tree, a canvas that had been slashed, some clay, a heap of students washing, and something drawn – or sneezed – by an elephant.

Later in the evening I would drink away the disturbing images among company with a more discerning idea of what art and culture is about. When I arrived home after a few days and checked the post I found a solicitor’s letter representing some guy named Damien Hirst. Apparently, the male urinal that I had relieved myself in had contained three artistically placed pubic hairs worth £500,000, that – in swishing about saying, ‘don’t cross the streams, Egon’ – I had washed away. I had also taken a five minute rest on a bench and in doing so ruined his best work by improving on it. I have since kidnapped his cat and threatened to mail it back to him in two halves.

That’s all I have to say about the Tate Modern. Microsoft Word has suddenly developed conciseness and is refusing to offer any more verbal ammunition.