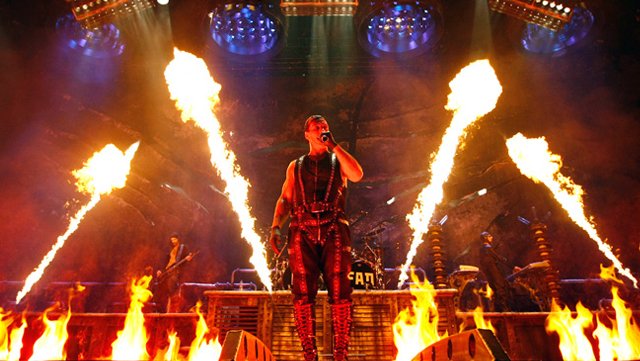 Rammstein sure know how to make a grand entrance! A German flag covering the entire stage drops to ground revealing the band, fronted by the surly looking Till Linderman – resembling a more carnivorous and satanic looking Frank-N-Furter; wearing a red leather apron, a hair net, and a red feather scarf. The inside of his mouth is glowing with a bright white light. He looks unnerving as he opens his mouth wide.

The anthemic ‘Rammleid’ pummels the crowd into frenzy during which the demonic Linderman chants ‘Rammstein!’  The combination of his resonant growls and the overpowering thrashes of guitar during ‘B******’ left me in awe – as if an invasion force had cornered me inside a phone box and violated me with a hand grenade. Not being able to understand the lyrics made the songs seem even more sinister.

Even without the hair net and other apparel Till Linderman looks like a hit-man employed by Hell to take out Death for being too soft on facists. The unsettling gaze in his eyes is that of a performer who is clearly at home with unhinged; the Dark Knights’ darkest nightmare.

Linderman’s baritone bombardment sends shock-waves across the field whilst he beats his fist (the ‘Till-Hammer’) furiously onto his thigh.  In Rammstein tradition fire and flames engulfed the stage.  During ‘Feuer Frei!’ Till and his ‘axe-men of the apocalypse’ breathe flames from their mouths.  For ‘Benzine’ Linderman sets a ‘staged invader’ on fire with a flamethrower.  More pyros and flames whip the crowd into frenzy as Rammstein powers through favourites such as ‘Links234’, ‘Sonne’ and ‘Pussy’ – where Till straddles a giant penis that ejaculates foam into the audience.

During ‘Liebe ist für alle da’ Linderman drops keyboardist Flake into a steel tub, filling it with molten ash poured from an elevated platform.  Flake is resurrected wearing an all-in-one LED suit – homage to fellow German music pioneers Kraftwerk maybe?. He plays the keyboards for the rest of the show while rhythmically marching on a treadmill.

A definite highlight of the show was during ‘Fish’ where Flake sails the crowd in an inflatable dinghy. Along the way he collects a military hat and a Union Jack.  A stowaway from the crowd jumps on board before being ejected by security.  During Flake’s sailing Till Linderman stands at the back of the stage with one and behind his back; stern and statuesque.

The performance was much for the senses to take in at times, with the imposing Linderman and his dark minions conjuring up a furious wall of sound, while Hell, fire and flames danced around them. In an ironic twist, the Rammstein machine drove 50,000 dumbfounded Brits to chant along in their mother tongue during a weekend that was supposed to celebrate Brit legends Iron Maiden’s homecoming.

This was an earth-shattering display of German engineering; surreal, unsettling, and sensational. The only time Linderman addressed the crowd was to say ‘thank you’ at the end. With his assertive tones it sounded more like a threat. Rammstein rocked! Rammstein burned!