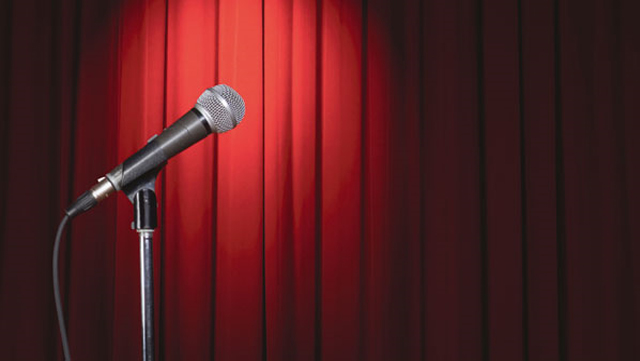 I hadn’t been to a stand-up comedy show in ages –the last time was to see a guy called Eddie Izzard. The King’s Head comedy night in Crouch End, London – where I’ve drank my way towards forgetting several New Years – hosts a comedy night on a Thursday, and is still on my ‘to do’ list. On one particular Thursday I would etch an entry into my ‘not to do’ list while attending a comedy night some 170 miles and a bridge away from Crouch End at the cosy Ballroom of The Beaufort Theatre. At least it was a Thursday.

A fiver can get you a lot of satisfying things, but what it can’t buy you is two hours of your life back. Comedy night sounded like a good idea at the time. It was only a fiver for a ticket and the chosen venue was at the nearby theatre where I used to work; the theatre where I spend a year charming the work colleague that would become my girlfriend – and still is. We arrived at the ‘comedy night’ and took our seats amid a sold-out crowd of 20 Tesco shelf stackers. A few minutes into the first ‘comedy’ act, it became apparent that we had been lied to from the outset and I have given serious thought to filing for compensation under The Trades Description Act.

For two hours we were bombarded with crass and dated material from the well worn, cider stained pages of ‘Toilet Gags for Dummies’. The only thing that made me sit up and take notice during the entire two tortuous light years was when The Buzzcocks was played during the interval. Who would have believed that a Canadian could do sarcasm better than the British natives that crafted it – a yardstick of how dismal the other acts were.  He was commenting on the fact that the January snowstorms had almost led him to buy a scarf. He was by far the best of the bunch; likening Canadians to the Welsh because we always fail to get into cup finals, we are nice, and we live next door to a country we hate. His jokes, though, were buried a long time ago alongside British politics – but at least he didn’t resort to using any exhausted Thesaurus entries for genitalia in order to get cheap sympathy laughs – unlike the next guy.

The most cringe-worthy of the questionable comedians – and the only Welsh one to add insult to the festering wound – struck the evening death-blow by dropping his trousers.  This summed everything up quite aptly: his act was totally and literally pants; at least Max Boyce had a leek to show him up. Then there was the compare from Bristol. There’s a fine line between having a laugh with the audience and being an obnoxious twat; he had obviously snagged his Bristolian bollocks on that fine line. If he was actually cutting and cleaver with his words it would have been funny, but audience retorts shouldn’t get the most laughs – and at the compares’ expense. Normally, hecklers are a pain in the arse, but in this instance they provided the bulk of the entertainment – only in the Valleys could this happen.

So, what do you get if you take a Bristolian troll, your average Canadian, a Welsh odd-ball, and give them free reign with a microphone? For the love of Zeus don’t look for the punch line. Go to your local Wetherspoons and watch some of the tanked-up locals instead – you’ll piss yourself laughing!